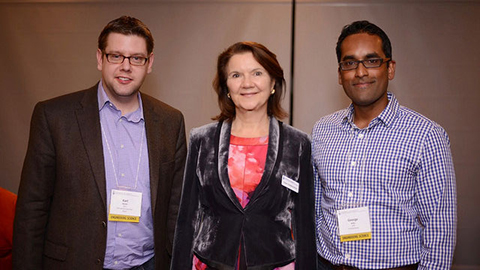 So naturally, they shut down those discussions two years into the process—a decision that Martin feels was beneficial to the young entrepreneurs.

“The biggest challenge, I would say, when you’re an entrepreneur and you’re starting something from scratch, is that you have certainty around nothing—everything is unknown,” Martin said. “We knew we weren’t going to get clarity of direction, but we needed clarity of vision.”

Martin and Agrafioti then entered a two-week period of furious do-or-die brainstorming on the future of their biometric security IP. The result was a vision for the now-famous Nymi: the world’s first biometric authentication wristband. Nymi solves the everyday problem of providing dozens of passwords, PINs, initials and signatures by using the unique signature of your heartbeat to identify you.

“All our ideas of how to handle persistence and proximity came out of those two weeks, and I attribute it to focus,” Martin said.

That was just one of many stories Martin shared with fellow alumnus and moderator George Babu (EngSci 0T0) at a recent BizSkule event in Palo Alto, Calif. Their conversation touched on how to find one thing to do well, the threat of giant multinational corporations moving into the wearable space, and the merits of running a tech startup in Toronto versus moving it to Silicon Valley.

“I moved my startup to the Valley… and we know we have very opposing views on this!” Babu said.

“My opinion is that capital finds good deals, anywhere,” Martin said. “I think sometimes we use it as an excuse when people fail to raise money in Toronto … I think good deals find money. No VC or angel investor would have invested in us during those first two years—down here or anywhere.” 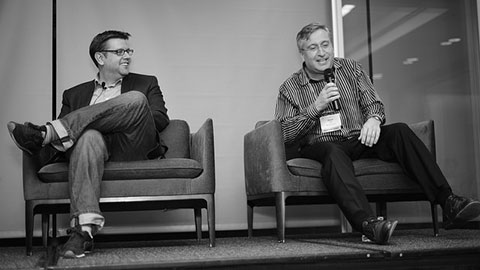 When the discussion turned to opportunities made possible by the Internet of Things, David Schie (EngSci 9T5), wearable technology expert and CEO of Linear Dimensions Semiconductor, joined the panellists on stage.

“People are getting tired of their wearables and throwing them into a drawer because there’s a barrier right now,” Schie said. “The next generation of devices is going to be more about measuring blood pressure, hydration, more diagnostics.”

All three agreed that one area in need of development is making power supplies match the size and strength of the chips they run—finding something that’s smaller and lasts much longer.

“This is actually a case of hardware leading software,” Shie said.

Martin agreed that there’s a piece missing in Silicon Valley at the moment.

From smart pillows to connected jewellery, wearable technology is on the brink of a major breakthrough into mainstream consumer products. As for Nymi, Martin can’t wait for the day he can raise his wrist to the scanner to pay for his morning coffee.

“The value for the consumer is when you can use this for multiple things,” he said. “This problem of having to take all these actions to access your accounts and make trusted transactions transcends everything.”

The annual San Francisco Skule™ Alumni Reception was held on Feb. 24 at the San Francisco Marriott Marquis. U of T Engineering alumni mixed and mingled while Dean Cristina Amon briefed attendees on updates from the Faculty.

Photo albums from the BizSkule event and the alumni reception are available on Flickr.