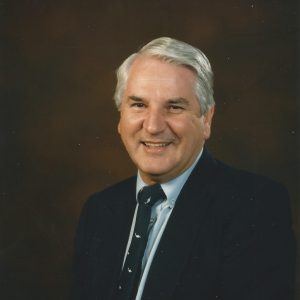 Few people in life can say that they overcame adversity, went on to power a nation’s most important industries, and provided comfort and wellbeing to hundreds of thousands of families. This is the story of Hugh. S. Irvine.

When Hugh passed away in 2019, he left behind a loving family, but also a great sense of pride and a legacy that continues to touch the lives of others. To say that Hugh had an extraordinary life is an understatement. Born and raised in Scotland, Hugh survived the Clydebank Blitz – a devastating air raid that dropped over 1,000 bombs on the city, killing 1,200 people and leaving 35,000 homeless. At the age of ten, Hugh had a serious bout with rheumatoid arthritis which left him with lifelong joint damage. And in his senior years, Hugh survived a fall that resulted in 49 days in ICU and three sets of plates in his neck, causing him to have to relearn how to walk, talk and use his hands. There can be no doubt that these experiences shaped Hugh’s personality, leading to a life of determination, ambition and perseverance.

As a young man, Hugh worked diligently to complete his Mechanical Engineering degree at night school, while working full-time as a draughtsman to help support his parents and sibling. Hugh’s commitment and strong work ethic were evident, and he became the first member of his family to graduate University.

Shortly after, Hugh married his sweetheart Morag and they immigrated to Canada in 1957. Hugh started his career at Acres Engineering, then moved on to General Electric of Canada where he spent 10 years. Thereafter, he joined Ontario Hydro, where he worked with passion and rose through the ranks to reach the position of Chief Engineer. He was a pioneer in the design and construction of nuclear power plants, including the Pickering, Bruce and Darlington plants.

To this day, Hugh’s career contributions continue to meet 60% of Ontario’s electricity demands in a cost-effective way. The plants that Hugh helped to design have become a lynchpin for the province’s core industries – powering hospitals, manufacturers, infrastructure, schools, and millions of homes.  If you are reading this in Ontario, whether on computer screen or lamp-side, it is fair to say that Hugh has impacted your life!

Hugh’s family and friends remember him as an engineering leader, a community volunteer, a musician, a hockey coach, and a man who “carried himself with grace and treated all with respect”.

In memory of their father, the Irvine Family have now established the Hugh S. Irvine Award. Through this award, Hugh’s children Lorraine Irvine (BA ’80), Michael Upton (BSc ’79, BASc ’81), Alan Irvine, and Maggie Irvine are continuing their father’s legacy by supporting U of T’s future engineering leaders.

Recognizing the profound impact of student financial awards, the Irvine Family hope to inspire Engineering students and help them achieve their potential.

“Just as Dad showed determination and grit in completing his Engineering degree, we want to support driven students and give them the extra boost they need to complete their studies. Dad spent most of his career here in Canada.  U of T Engineering is the perfect place to recognize both the country and career that he loved so much. It’s also where Michael and I attended school. We are proud to continue Dad’s legacy at a place that has so much meaning for our family”, says Lorraine.

In recognition of Hugh’s perseverance and commitment to the field of engineering, the Hugh S. Irvine Award will be conferred to fourth-year Nuclear Engineering students who have financial need and have excelled academically.

The Faculty of Applied Science & Engineering would like to express its appreciation to the Irvine Family for this act of kindness and generosity. The impact of this award is a fitting tribute to a man who made a world of difference in the lives of others. Thank you.