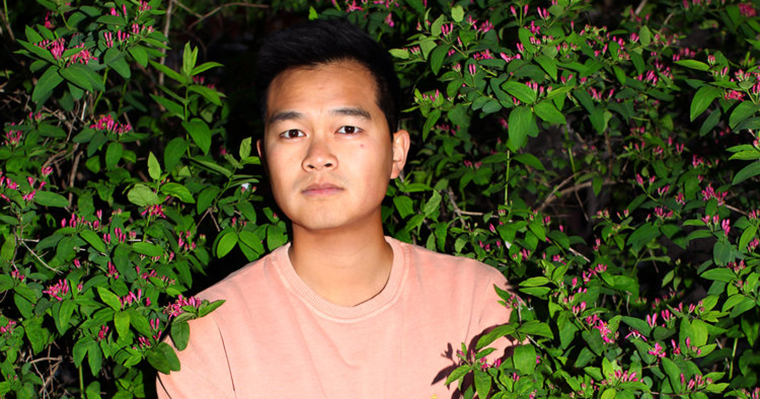 “I’ve realized that I function best when I have a hand in many different things,” Jonathan Sun told U of T Engineering in 2016. (Photo: Christopher Sun)

To nearly half a million Twitter followers, he’s an “aliebn confuesed abot humamn lamgauge,” a daily source of funny, moving and thought-provoking ideas, delivered in fewer than 140 characters.

But before all that, he was Jonathan Sun (EngSci 1T1 + PEY), a U of T Engineering Science student with passions for design, architecture and city building, as well as comedy, poetry and performance.

Today, Sun is a doctoral student at the Massachusetts Institute of Technology (MIT), a fellow at the Berkman Klein Center for Internet Society at Harvard, and a creative researcher at the Harvard metaLAB, where he studies social media and online community.

He has also written a book: everyone’s a aliebn when ur a aliebn too. Through quirky drawings and observations, the book extends Sun’s Twitter personality and provides inspiration to readers hoping to overcome loneliness and find acceptance, whatever form it takes.

Sun visited U of T Engineering on September 25 to give a reading and sign copies of the book.

Five things you may not know about the pop culture polymath.

1) Sketch comedy is his first love

Sun was first introduced to comedy as a kid through The Muppet Show and early Jackie Chan films. He took a serious interest in sketch comedy by watching Saturday Night Live, MADtv and a variety of shows he discovered on YouTube including The Micallef P(r)ogram(me), Fry and Laurie and Derrick Comedy.

While studying in the Faculty, Sun not only directed Skule Nite™ — the annual musical-comedy revue produced by U of T’s Engineering Society — but also served as its head writer and oversaw the creation of electroluminescent lightsuits that lit up the performers’ bodies.

Sun has also written sketch comedy and performed at Second City in Toronto.

Lin-Manuel Miranda, the Pulitzer Prize- and Tony Award-winning creator of Hamilton: An American Musical, is a huge champion of Sun’s work. Miranda even provided a blurb for the back cover of everyone’s a aliebn when ur a aliebn too.

3) He’s been tweeting for nearly a decade

Sun first joined Twitter as @jonnysun in 2008 after graduating from high school. He viewed it as a great way to keep in touch with his friends as they moved away to attend university. It wasn’t until 2011, when he relocated to Connecticut to pursue a master of architecture at Yale University, that he truly found his voice.

Inspired by the typo-laden viral tweets of politicians and other authority figures, he started experimenting with the aesthetics of text and keyboard-based grammatical mistakes as a comedic outlet. Soon after, the “aliebn” sent its first 140-character haphazard musing to the Twittersphere.

4) He created a self-care bot

Sun is also behind @tinycarebot, a self-care Twitter bot that sends positive hourly reminders to its followers. Sun says he created the bot to lift people’s spirits following the 2016 US Presidential Election.

?: remember to take a quick moment to breathe calmly please