Skip to Main Content
U of T ENGINEERING
Posted May 4th, 2022 by bwesseling 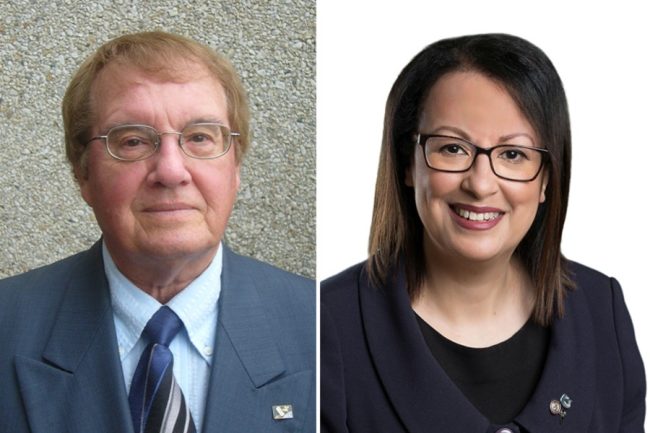 “These two outstanding members of the U of T Engineering family have had tremendous and extensive impact, not just through their professional contributions, but for the betterment of society across Canada and around the world,” said U of T Engineering Dean Christopher Yip. “On behalf of the Faculty, my warmest congratulations to them on this well-deserved honour.”

Tennyson was a professor at UTIAS for four decades and Director of UTIAS from 1985-1995. He was also founding Director of the University of Toronto’s Government Research Infrastructure Program office. Tennyson’s research has involved studying the effects of the environment in space on materials. He holds several patents for protective coatings for spacecraft and fibre-optic sensor systems. Tennyson was a founding member of the International Space University and president of the Canadian Foundation for the International Space University. He served on the inaugural Canadian Defence Science Advisory Board and as a Board member for the Canadian and Ontario Centres of Excellence.

Over the past ten years Tennyson has worked towards mitigating the water crisis in the Sahel region of Africa. He has formed a team of international experts to implement the Trans Africa Pipeline, an 8,000 km pipeline using solar-powered desalination technology to provide potable water for 11 countries.

Tennyson is a Fellow of the Canadian Aeronautics and Space Institute (CASI), and his work has been recognized with the CASI Turnbull Lecturer, the Canadian Society for Mechanical Engineering Duggan Medal and the CASI McCurdy Award. He has received awards from the Canadian Department of Natural Resources for his fibre-optic sensors for pipelines, and from NASA for his impact detection system for spacecraft. In 2010, he was part of a team that received a Canadian Space Pioneer Award for their contribution to the Apollo 13 rescue mission.

An award-winning engineer and leader, Southwood is Vice-President, Corporate Affairs and Strategic Partnerships at Engineers Canada, the national organization of the 12 engineering regulators that license Canada’s 300,000+ members of the engineering profession. Prior to joining Engineers Canada, Southwood led the Canadian Urban Development & Infrastructure Sector and the Global Sustainable Cities teams at international consulting firm Golder Associates, where she was the first Black woman to be appointed to the senior leadership position of Principal globally.

Southwood is a dedicated volunteer with a number of organizations and has served on several boards, providing strategic advice across many sectors. In 2021, she was appointed by the federal government as an Honorary Captain of the Royal Canadian Navy. Southwood is a Fellow of Engineers Canada and a recipient of the Province of Ontario’s Leading Women Building Communities Award. She has been honoured as one of Canada’s Clean50 for her work towards sustainable development and has been elected a Fellow of the Canadian Academy of Engineering.

Southwood has received the Ontario Professional Engineers Engineering Excellence Medal and an Honorary Doctorate from Ontario Tech University, and was twice named one of WXN Canada’s Top 100 Most Powerful Women. In 2018, she was inducted into PEO’s Order of Honour and was selected to provide the Dineen Lecture. In 2019, she was inducted into the University of Toronto’s Engineering Hall of Distinction and received the Governor General Sovereign’s Medal for Volunteers.