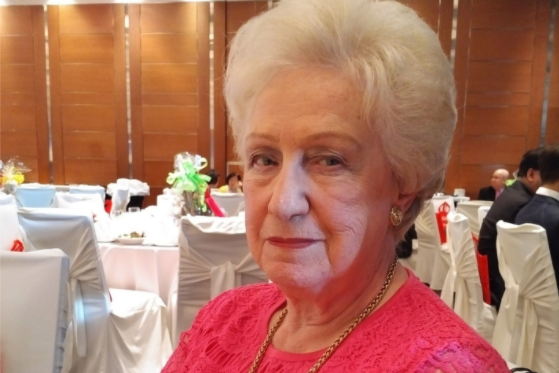 Ruth Sprenger established the C.J. Dick and Ruth A. Sprenger Scholarship for Mature Students to honor her late husband’s persistence, drive and the ‘’tinkerer spirit’’ that motivated him from the time he was a young boy.

When Dick Sprenger enrolled in the highly competitive engineering program at the University of Toronto in 1962, he was something of a rarity. The tall, unassuming Dutchman was 34 years old, the oldest in his class at a time when mature students were not the norm. Even more unusual, he’d never finished high school or even had much formal education beyond elementary school. But that didn’t deter him from his dream of becoming an engineer. With a little luck, a lot of hard work and a firm kick in the pants from his wife, Ruth, he went on to complete undergraduate and master’s degrees in electrical engineering and forge a successful 25-year career at IBM.

Now, Ruth has established an undergraduate scholarship – the C. J. Dick and Ruth A. Sprenger Scholarship for Mature Students in Engineering – to honour her late husband’s persistence, drive and the “tinkerer spirit” that motivated him from the time he was a young boy.

Dick was born in Rotterdam and grew up in Indonesia, where his father was dean of the university. When the Second World War broke out, he and his family were put in a Japanese internment camp with other foreign nationals. “Dick’s formal education ended right then and there,” says Ruth. Because he was tall for his age, Dick was imprisoned with the adults, depriving him of even the most basic education being afforded children in the camp. “After the war, he and his family returned home, but Dick never went back to school,” says Ruth. “He’d seen too much.”

But he’d always imagined himself as an engineer. An autodidact by nature, Dick spent his whole life taking things apart and putting them back together, from toy trains to transistor radios. “If he wanted to know how something worked, he’d look it up, and always had his nose in a book or technical manual,” says Ruth. “He would fix our car, the microwave, he even put the roof over our head – literally – by teaching himself how to reroof our house.”

Dick went on to become an air traffic controller, eventually moved to Canada, and worked in an electronics store, always yearning for something that seemed just out of reach. But perseverance was in his DNA, engineering was in his blood – his father and oldest brother were civil engineers, another brother an electrical engineer back in Holland – and Ruth had his back. With her firm encouragement, he presented himself at the University of Toronto, where a fateful encounter with Professor Jim Ham – a future president of the University – would change the course of his life.

In fact, the Sprenger Scholarship that Ruth has established recognizes the life-changing role Professor Ham played in her husband’s success. Ham was head of the Department of Electrical Engineering when Dick approached him about enrolling. Dick had little in the way of formal education, and his English was not the strongest, but Ham recognized his potential and made an unusual decision: after a grueling four-hour oral exam, which Dick passed with flying colours, Ham agreed to welcome him into the Class of 6T6 – on one condition. “Professor Ham agreed to let Dick in on the condition that he pass all of his first-year exams, which he did,” says Ruth, proudly. On graduation day, Professor Ham, who was by then Dean of the Faculty, came to congratulate Dick and told him how proud he was of what he had achieved. “I got the sense that he knew Dick wouldn’t let him down, and of course, anyone who knew Dick knew that he would do everything in his power not to disappoint you.”

When Dick died, Ruth wanted to do something special in his honour. Something that reflected the student, the builder, and the man with whom she’d spent so many wonderful years. The creation of a new scholarship, one geared specifically toward mature students, who can face unique challenges entering higher education, seemed the perfect choice. Wanting to ensure the impact of her support continues to grow long into the future, Ruth went one step further and included an additional gift to the scholarship endowment in her will.

“Dick was very caring, very shy in many respects, but his time at U of T gave him such a sense of accomplishment,” Ruth says. “While I don’t think he would appreciate the fuss of having his name on a scholarship, I do believe he would think the idea was neat that his name is attached to something that will help other students like he was. And perhaps his story will inspire someone else to go back to school or follow a dream they thought they’d lost.”

To learn more about the C.J. Dick & Ruth A. Sprenger Scholarship for Mature Students, establishing your own named scholarship, or arranging for a gift in your will, contact Kristin.philpot@utoronto.ca