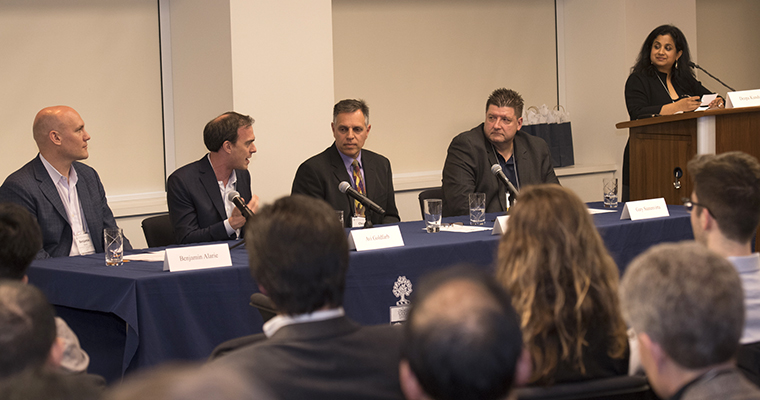 This article was originally published on the Bennett Jones blog on April 21, 2017.

Taking Wayne Gretzky’s famous advice — “skate to where the puck is going, not where it has been” — will get easier for businesses that embrace artificial intelligence (AI). That’s the conclusion I drew from a sold-out event entitled, From Big Data to Deep Learning: How Business is Embracing Artificial Intelligence hosted at Bennett Jones. The event featured a stellar panel discussing the impact of AI on business and society. It was moderated by Deepa Kundur (ECE), chair of the Division of Engineering Science and professor and director of the Centre for Power & Information, in The Edward S. Rogers Sr. Department of Electrical & Computer Engineering. Panel members were:

The BizSkule Speaker Series is organized through the University of Toronto’s Engineering Alumni Network. It showcases engineering leadership in business through keynote speakers and industry panelists ranging from startup founders to global C-suite executives. Its networking-friendly events connect successful, business-savvy engineering alumni at all stages of career development. This is the fourth year in a row that Bennett Jones has sponsored the series.‎

So how is a well-known quote about hockey relevant to AI? As Goldfarb put it, AI lowers the cost of prediction. AI allows massive amounts of data to be analyzed much more quickly and cheaply than humans can, meaning that making predictions based on experience data is much easier. That allows business to make better strategic and tactical decisions, or in hockey terms, to get their people and capital skating to where the opportunity is going to be, not where it has been in the past.

But what about the humans?

The panel was optimistic about prospects for humans in the AI era. Saarenvirta, whose company Daisy Intelligence is a leader in using artificial intelligence to assist retailers to make smarter operational decisions, noted that AI reduces the weekly burden on grocers of deciding what products to promote and what inventory to stock. This frees up their human talent for value-added tasks, including those that require human intuition.

And while there will be dislocations for workers in occupations disrupted by AI, and those need to be carefully managed, we can take comfort that our economy has made these transitions before. Carolyn Wilkins, senior deputy governor of the Bank of Canada, addressed the issues of AI and technological innovation in her April 18, 2017, speech to the Toronto Region Board of Trade. One of her themes in Blame it on the Machines? was about past technological advances that did not lead to a sustained rise in overall unemployment. To cite one example, Wilkins pointed out that a century ago, agriculture went from representing more than one-third of all jobs in Canada to less than two per cent today, without creating a permanent jump in unemployment.

Artificial intelligence holds the promise of making better decisions, faster and cheaper, than ever before and if Canadian businesses embrace it, the economy could get a Stanley Cup-sized win.

Claire Kennedy (ChemE 8T9), founder of BizSkule, is a partner at Bennett Jones LLP and is recognized as one of Canada’s leading tax lawyers and transfer pricing advisors. She also is a director of the Bank of Canada, the country’s central bank, and of Alamos Gold Inc., a publicly traded mining company. Kennedy has a rich history of engagement in Faculty governance and the engineering community. She will begin her term as chair of the University of Toronto’s Governing Council on July 1, 2017.